The History of the Mouthguard

Of course, protective sporting equipment hasn’t always existed. Helmets, shin pads, shoulder pads and mouthguards, just to name a few, have evolved over time, just as the nature of sport has. Nowadays, however, the mouthguard is vital as a protective piece of sporting equipment, helping to prevent both mouth and jaw injuries. While the mouthguard began its journey at the turn of the 20th century in London, it gained its notoriety in America in the 1950s and 60s. 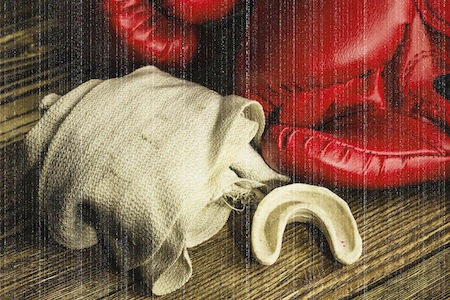 Over the years, the design and production of the mouthguard has developed significantly. The first mouthguard was developed in 1890 by a London dentist, Woolf Krause. It was called a Gum Shield and was made from a material called gutta percha. It was specifically designed to be worn by boxers to prevent them getting lip lacerations which were a common injury of this sport at the time. Philip Krause, his son, also a dentist and amateur boxer, refined his father’s design and began to form the mouthguard out of vella rubber. By 1927, mouthguards had become prevalent among boxers in America and began to find their way into dental literature.

Some years later, in 1947, Los Angeles dentist, Rodney O. Lilyquist, used transparent acrylic resin to form the first acrylic splint and the mouthguard was molded to fit over the upper and lower teeth which made it much less noticeable and more comfortable to wear. Basketball and football players began to wear this design which gave the mouthguard some exposure. Additionally, The Journal of American Dental Association picked up Lilyquist’s technique, which led to nationwide recognition.

During the 1950s the American Dental Association (ADA) started researching mouthguards and promoted their benefits to the public. By 1960 the ADA recommended the use of latex mouthguards in all contact sports and by 1962 all high school football players in the U.S. were required to wear the mouthguards. The NCAA (American College Basketball) followed suit in 1973 and made mouthguards mandatory. Since the promotion of mouthguards the number of dental injuries have dramatically decreased.

Today, mouthguards are a common feature in many sports. The Australian Dental Association recommends that anybody of any age playing a sport where there may be a risk of a blow to the face, should be wearing a mouthguard. The American Dental Association currently recommends the use of a mouthguard in 29 sports including acrobatics, basketball, bicycling, boxing, equestrian, football, gymnastics, handball, ice hockey, inline skating, lacrosse, martial arts, racquetball, rugby, shot putting, skateboarding, skiing, skydiving, soccer, softball, squash, surfing, volleyball, water polo, weightlifting and wrestling. Interestingly, however, the number of US sports in which a mouthguard is mandatory to wear is only 4!

Perhaps the issue of the mandatory wearing of mouthguards is one that needs to be explored further. Both the Australian Dental Association and the American Dental Association stress the importance of wearing a mouthguard in any sporting activity that has a risk of mouth injury. Additionally, the research regarding the benefits of wearing this protective piece of sporting equipment is clear. However, despite this, most at-risk sports still don’t have a compulsory requirement that mouthguards be worn. Maybe it’s time for parents, coaches and sporting clubs to change this thinking by voicing the view that mouthguards be worn. Such an expectation could make a real difference to the rules regarding the mandatory wearing of mouthguards in sport.

So, just like any other piece of sporting equipment, make sure you or your child always wears a custom fitted mouthguard to ensure the mouth and jaw are properly protected. Our wonderful staff here at Corinna Dental can help you with all of your mouthguard needs. Check out our mouthguard page for more information https://corinnadental.com.au/canberra-woden-dental-services/general-dental-services/sports-mouthguards/