The Anti-Sugar Movement: Based On Fact or Fiction?

There is a strong anti-sugar movement that has taken Australia by storm. Started perhaps by David Gillespie’s book, Sweet Poison, the movement has gained traction and seems to be becoming more mainstream. If you don’t currently follow the low-sugar lifestyle yourself, you almost certainly know someone who does.

A more recent player in the area is Damon Gameau. His 2015 documentary, ‘That Sugar Film’, has been well-received by audiences throughout Australia. It tells of his journey exposing hidden sugars in so-called ‘healthy’ foods. 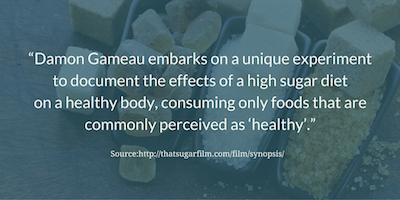 Diets are often referred to as ‘fads’, and there is a generally-held belief that fads are neither healthy nor beneficial. So what about the anti-sugar movement? Is it just another eating plan full of hype and no substance? Or is there some decent scientific evidence to back what ‘That Sugar Film’ claims is true?

Our dentists have spent years studying and observing the effects that sugars have on teeth and gums. We decided that we needed to know more about sugar and how it affects the body and mind. Prompted by theAustralian Dental Association’s recommendation that all Australians should watch That Sugar Film, we revisited the film and the website to learn more about sugar’s influence on general health.

In case you haven’t seen the movie yet, here’s the official trailer:

‘That Sugar Film’ highlights the fact that many so-called ‘healthy’ foods such as muesli bars, fruit smoothies and low-fat yogurts are actually very high in sugar. Gameau talks a lot about ‘hidden sugars’. These are sugars which have typically been added to processed foods, especially low-fat foods, in order to make them taste better.

Gameau set out to see what would happen to his health when he only ate foods which claimed to be healthy options. His diet prior to the film was high in good fats and protein and low in refined carbohydrates (sugars).

During the 60-day experiment he didn’t eat any sweets, chocolates or ice-cream, and he was careful to consume the same number of calories that he was consuming prior to this experiment. He ended up eating a lot of low-fat foods and highly processed foods like ‘healthy’ breakfast cereals, and drank ‘healthy’ beverages like fruit juice.

After one month his weight had increased by five kilos.

After 60 days he had high levels of triglycerides in his bloodstream, putting him at greater risk of heart attack and stroke. He also reported significant effects on his mood and concentration.

Of course, while this was a very interesting (and highly entertaining) case study of just one person, such information is only really useful if its results can be reproduced elsewhere. Fortunately the That Sugar Film blog has provided links to a growing number of independent studies and research that confirm and expand upon the claims that Gameau has made.

New research that reviewed 17 diet-related studies has shown that low carbohydrate diets (in which all forms of carbs, including sugars, are reduced) are 99% more effective in achieving weight loss compared to low-fat diets.

This is pretty counter-intuitive, especially because Australians have been muttering the low-fat mantra for years.

Low carb diets are also 98% more likely to reduce your risk of poor heart health or stroke than low-fat diets. The study goes further in its conclusion, recommending a change to national dietary guidelines. 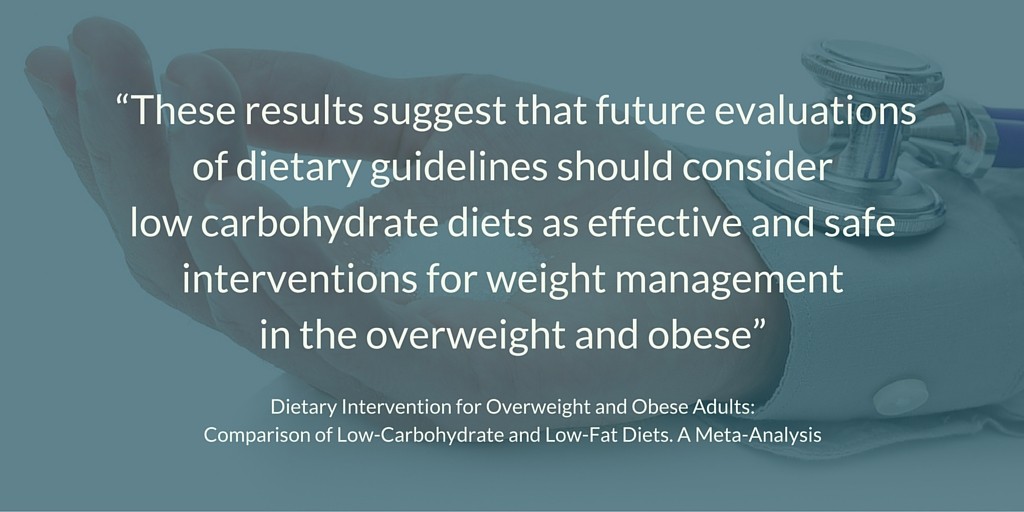 Another important US study demonstrated similar results in obese children.

Another group of similar obese children consumed the same amount of calories, but from a low fructose diet.

The study found those children on the low-fructose diet had much greater improvements in their metabolic health in just nine days. Metabolic health includes body functions such as blood pressure, cholesterol levels and liver function.

Jean-Mare Schwarz, one of the authors of the study, said, “it’s essential for parents to evaluate sugar intake and to be mindful of the health effects of what their children are consuming.”

When it comes to childhood obesity it may be the quality of food rather than the quantity of food that is more important. 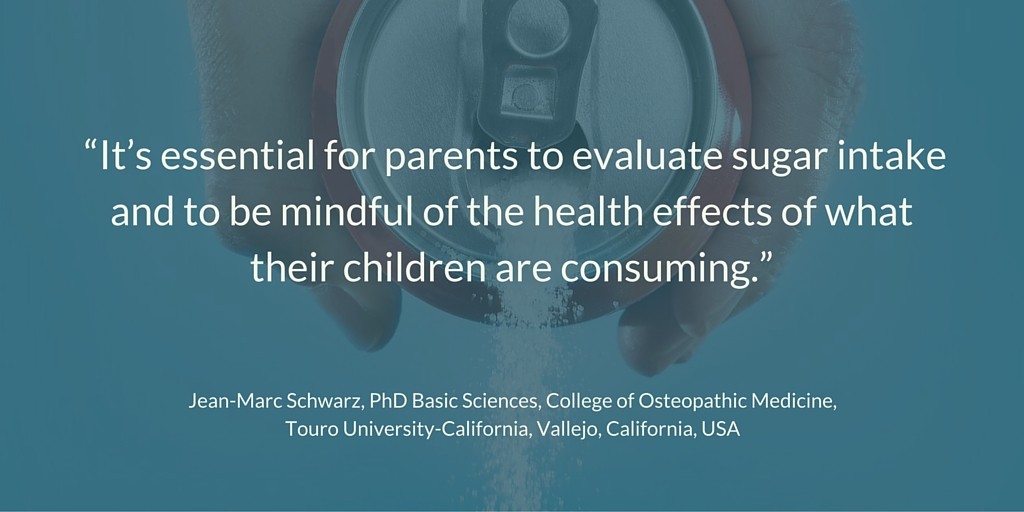 The study found that by “reducing consumption of added sugar, even without reducing calories or losing weight, has the power to reverse a cluster of chronic metabolic diseases, including high cholesterol and blood pressure, in children in as little as 10 days”. 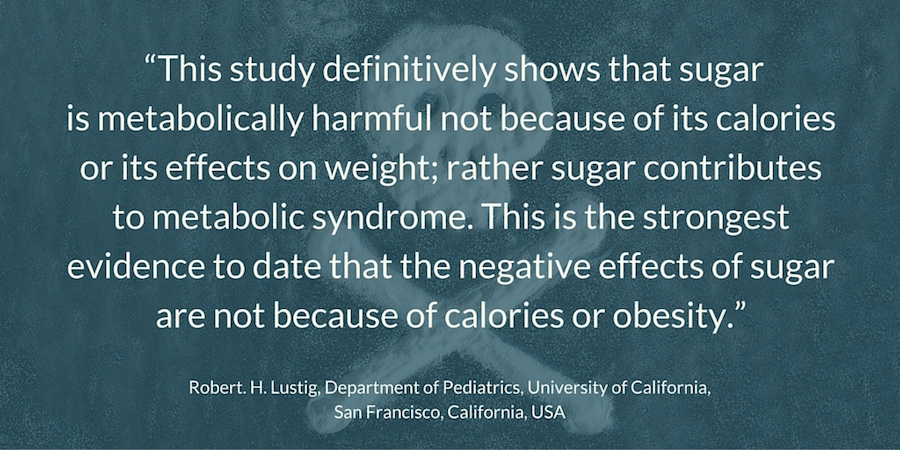 ‘That Sugar Film’ not only looks at the impact sugar has on heart and liver function, but also on brain function. During the film Gameau describes the mood swings, irritability and loss of mental clarity he experienced while on the sugar diet.

Dr David Ludwig, one of the authors of the study says “activation of this brain region on a weight loss diet would erode willpower, making sugary and starchy foods exceedingly hard to resist.” Corn syrup is found in many fast foods and highly processed foods we eat today.

This study is another solid example of how the brain can be ‘hijacked’ by sugar… How highly processed carbs can interfere with basic brain circuitry.

Another new study involved researchers taking a closer look at one of the largest clinical trials of low-fat diets undertaken in the 90s. The study, called The Women’s Health Initiative took 8 years to complete and involved 50,000 women.

Researchers observed a correlation between an increase in refined carbohydrates (sugars) and depression. 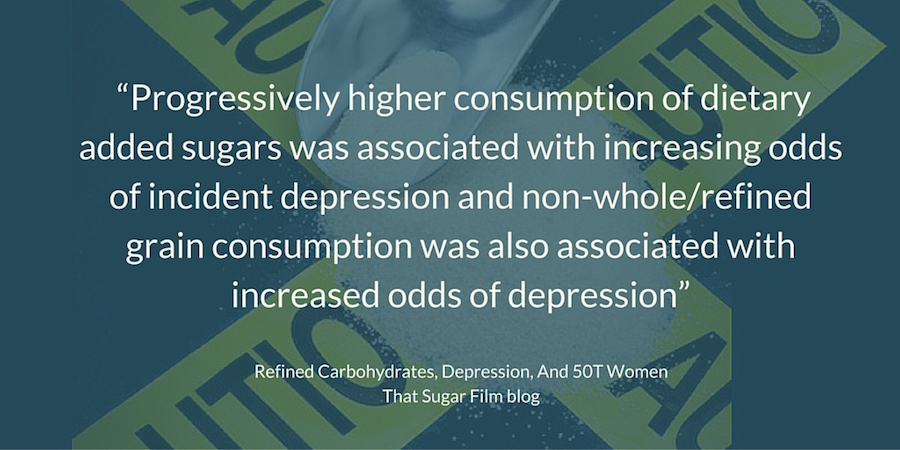 The correlation was observed in women who were postmenopausal, so it’s important to keep this in mind and to remember that correlation does not mean causation. The authors of the study have suggested more research be done this area. 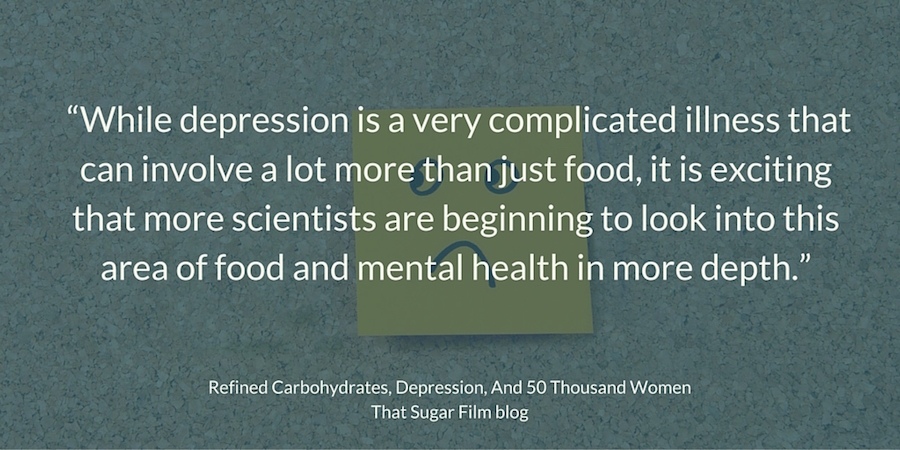 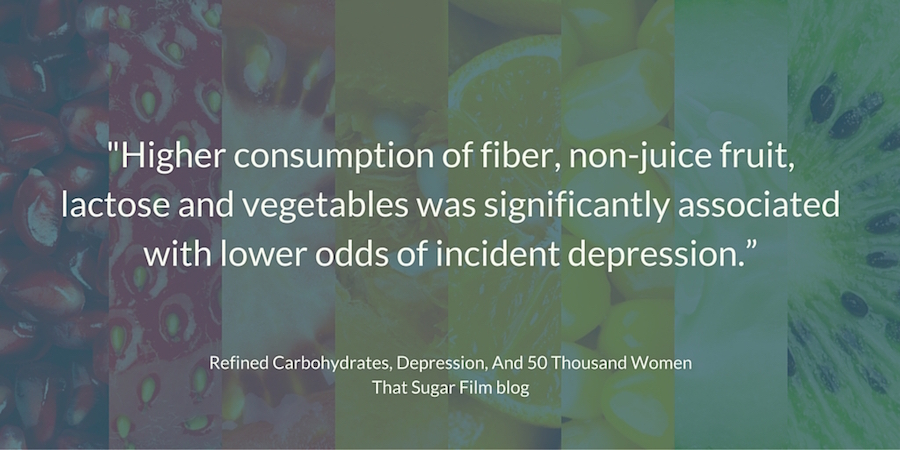 Sugar is not our friend.

It’s a well-established fact that consumption of sugar leads to poor dental health. This is because dental decay occurs when plaque bacteria come into contact with sugar. After contact with sugar, bacterial plaque produce an acid. This acid causes tooth enamel to break down leaving a cavity that will increase in size over time without intervention.

‘That Sugar Film’ highlighted an extreme case of dental decay caused by drinking too much soft drink. Carbonated beverages (or ‘pop’ in the US) contain a lot of sugar and are often acidic as well.

Sugar and acid is a lethal combination for teeth.

In the film we meet seventeen-year-old Larry from Kentucky. When Gameau met Larry he was drinking up to 12 cans of soft drink (Mountain Dew) a day. As a result, Larry needed to have twenty-six teeth taken out and a full set of dentures fitted.

His dentist explained to Gameau that this situation is not rare in Kentucky. Even Larry’s three-year-old nephew was consuming 6-7 cans of soft drink of day from his baby bottle!

You can watch a clip about Mountain Dew Larry below. A word of warning— his teeth are not a pretty sight!

World Health Organisation (WHO) guidelines recommend children aged 4 – 8 eat only 3 teaspoons of sugar a day. In That Sugar Film, Gameau calculates that a typical breakfast of fruit juice, Just Right cereal and a low fat yogurt contains 21 teaspoons of sugar.

It’s ridiculously easy for Aussie kids to eat way more sugar that WHO recommendations, even if they start the day with a ‘healthy breakfast’ and don’t eat many lollies or cakes.

As a nation, our kids’ teeth reflect the presence of plenty of sugar in their diets. According to the Australian Institute of Health and Welfare , in 2009, 42% of 5-year-olds and 61% of 9-year-olds experienced decay in their baby teeth!

These statistics are dreadful and demoralising. It’s time to make a change.

Dentists have been worried for years about the effect too much sugar has on our dental health. By reducing the amount of sugar we eat, our dental health will improve. Now science is showing us that sugar can also have a harmful impact on our general and mental health.

It makes sense that if it’s bad for your teeth it’s probably going to be bad for the rest of your body too.