In the April edition of ‘Bite Magazine’, Dr Chris Hardwicke of CDG talks about his passion for and love of horses and the equestrian discipline.

Dr Hardwicke’s interest in horses began 24 years ago when his three daughters were very young and he began taking them to riding lessons. After spending time as a spectator, he was encouraged by one of the trainers to have a go at riding himself. “Before I knew it, it had taken over my life. It was a really good thing to do with my girls. We had fun, spent time together and were seriously competitive against each other,” Dr Hardwicke says. Since then, he has never looked back. 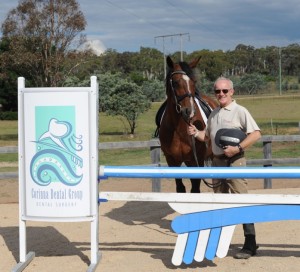 As time progressed, Dr Hardwicke became involved in participating in competitions with his daughters. He has always been involved at some level whether it be in the show ring or as an eventer, competing in dressage, show jumping and cross country. He is currently an NCAS (National Coaching Accreditation Scheme) two-level coach teaching across all disciplines. Dr Hardwicke is one of five national committee members responsible for equestrian coaching with Equestrian Australia. He is also a coach educator, workplace assessor and national assessor. 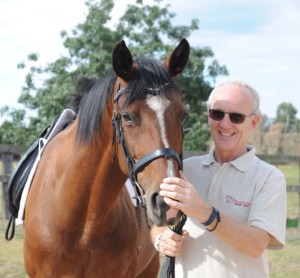 As well as being involved in riding, teaching and assessing, Dr Hardwicke also breeds horses. Currently, one of his horses, Meeandah Zebedee, is being ridden by a blind teenager in both dressage and show jumping. This is something Dr Hardwicke is very proud of.

The two horses in the picture are mother and son. The mother is Meeandah Cappella (aka “Ella”) and the son is Meeandah Sonata (aka “Sunny”). Dr Hardwicke bred them both. Sunny is 6 months old and his sire is a German stallion (semen imported). Ella is sister to the other horse in the show jumping picture, whose name is Meeandah Adagio (aka “Addie”), also bred by Dr Hardwicke. Both Ella and Addie were bred as dressage horses- Dr Hardwicke describes them both as being “quite talented and well bred”.

Dr Hardwicke describes his involvement with the equestrian world as “one of the greatest joys of my life”. You can read the full article here http://bitemagazine.com.au/saddle-up/ .