From last time’s Corinna’s Canberra featuring City, we move north to its neighbour, the leafy suburb of Turner.

Turner made news about a year ago when a Lego statue was stolen (and later on found) from one of Turner’s iconic houses– the one owned by a Lego fanatic.

Let’s get to know more about this suburb– its history, the people living in the area, and its amenities in this quick suburb in spotlight feature.

Turner is named after George Turner, a legislator, federalist and one of the founders of the Constitution (source: ACT Place Names). The suburb was gazetted on 20th September 1928 but it was not until the ’40s when Turner was first settled.

Streets in Turner were named after pioneers, legislators, and writers: 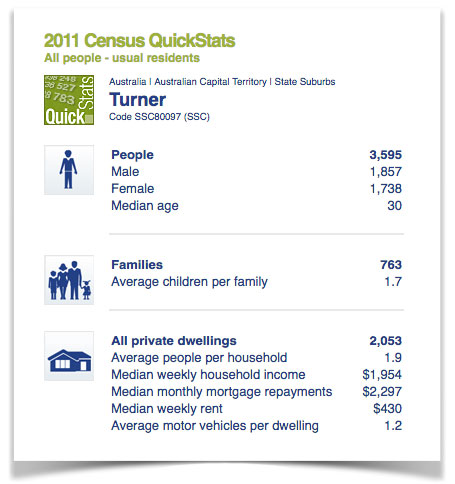 According to the 2011 Census data, there are 3,595 people living in Turner, with a median age of 30. Half of the people aged 15 years and above were single and around 29 % were married. Families are mostly composed of couple without children (68%) and couples with children (28%).

Top industry of employment in Turner is Central Government (28%) followed by Tertiary Education and Defence.

Turner is situated halfway between two significant and well-known Canberra landmarks: Black Mountain to the west and Mount Ainslie to the east. There’s an excellent view of these two landmarks from a number of vantage points within the suburb of Turner.

Turner is also close to the campus of the Australian National University (ANU) and the art and cultural precinct of Civic West. Unlike most suburbs in Canberra, Turner does not have its own shopping centre by name, instead relying on the nearby O’Connor shops and to some extent City.

Turner houses one of Canberra’s oldest schools, Turner Primary School, which opened in the 1950s.

Haig Park is the major public open space in Turner and is designated a ‘District Park’, with Northbourne Oval having restricted access for recreation. The Bowling Club, the Tennis Club, Havelock House and a number of religious institutions also provide quality community resources within the suburb.

Corinna Dental’s Deakin practice is around 14 minutes away from Turner (via Commonwealth Ave).