From last week’s Corinna’s Canberra featuring Symonston, we move around 15 kilometres north to the leafy suburb of O’Connor. O’Connor’s neighbour suburbs include Bruce, Lyneham, and Turner.

The suburb is well-known for its heritage listed type of dwellings called Tocumwal houses and the beautiful walking trails of O’Conner ridge.

Get to know more about O’Connor, its history, people, and features in this Corinna’s Canberra article.

O’Connor is named after legislator, Federalist, and one of the founders of the Constitution: Richard Edward O’Connor. The suburb was gazetted on 20th September 1928 and was first settled in 1948. The suburb, characterised by its “curvilinear tree-lined streets, wide verges and blocks, was a part of Walter Burley Griffin’s original vision for the city, which sought to provide a healthy social and physical environment in a garden-like setting”. (Source: O’Connor Neighbourhood Planning) 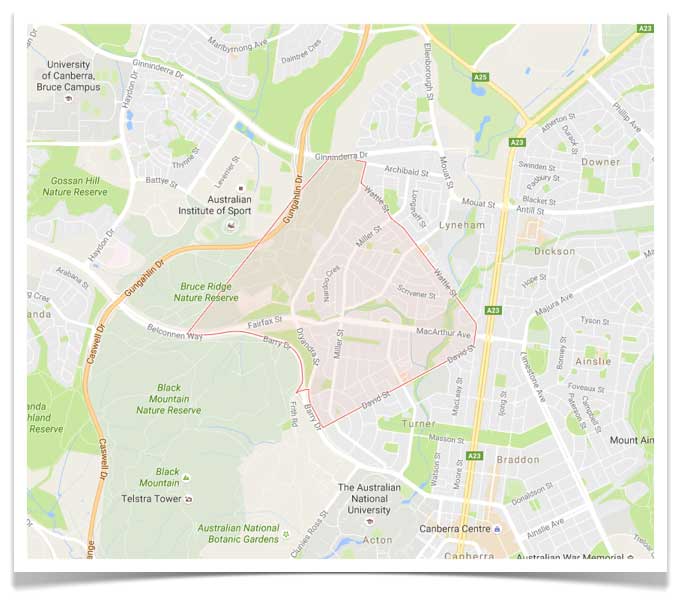 Streets in O’Connor are named after Australian flora, legislators, pioneers, and explorers. Below are some of the street names and their origin: 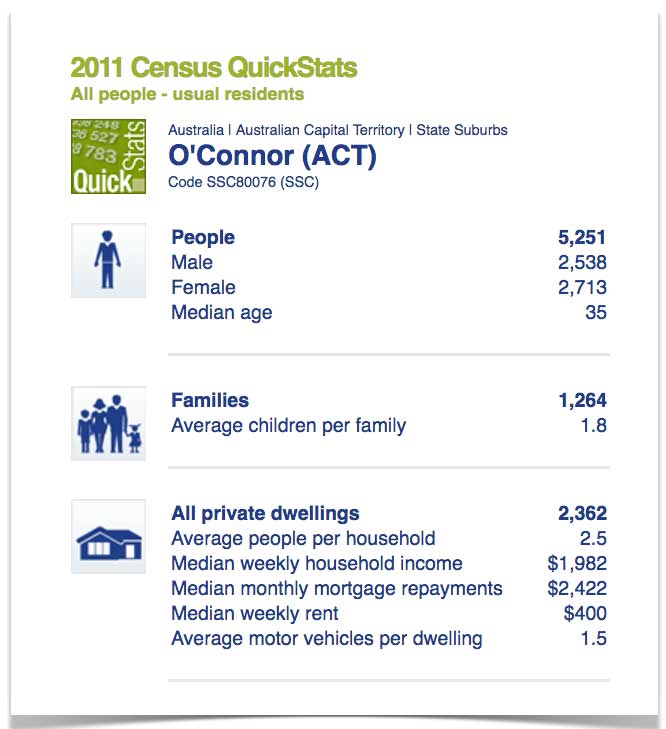 Most of the employed people in O’Connor work in Central Government Administration (22.8%), followed by Tertiary Education (9.7%). Other industry of employment include restaurants and takeaways and legal and accounting services.

O’Connor, being part of the Inner North, enjoys views across to Black Mountain and the Majura Ranges. O’Connor Ridge, a highly valued natural bushland area, is located to the west of O’Connor.

The Sullivans Creek Open Space Corridor, an important recreation area providing a pedestrian/cycle link between the employment and commercial areas of Dickson and Civic and the Australian National University, runs through O’Connor.
O’Connor, being near to Northbourne Avenue and Civic, enjoys convenient access to jobs, major recreation, entertainment and community uses. The suburb is also well positioned in terms of convenient access for residents, students and staff to the Australian National University.
The suburb is serviced by a number community facilities:

O’Connor also has a good variety of places to catch up over dinner or a drink, like The Duxton, Tu Do , and 39 Steps.

In 2014, O’Connor became Canberra’s 6th dog-friendly suburb when it opened its 1.2-hectare off-leash dog park located on Fairfax Street. Other suburbs with off leash areas are Belconnen, Greenway, Yarralumla, Forde, and Casey.

The nearest Corinna Dental Group practice to O’Connor is our Brindabella Business Park clinic, which is around 10 kilometres away and 15 minutes via Fairbairn and Limestone Avenues.