The focus of Corinna’s Canberra this month is the suburb of Lyons, which is part of the Woden Valley. Lyons derives its name from former Prime Minister Joseph Lyons who was leader of Australia from 1931-1939. Prior to becoming Prime Minister, Joseph Lyons was the Premier of Tasmania (1923-1929). Accordingly, most of the streets in the suburb of Lyons are named after Tasmanian towns and places.

Lyons, gazetted on 12th May 1966, is located between the suburbs of Curtin and Chifley. It is a neatly presented district and is home to some lovely retail outlets, a news agency, and coffee shops. There are several schools in this area including: Lyons Early Childhood School, Curtin Primary School, Holy Trinity Primary School, and Sts Peter and Paul Primary School. Part of Canberra Nature Park is also located within this picturesque suburb. 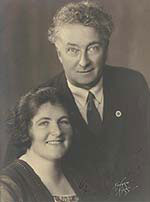 Joseph’s wife, Enid Lyons, was also well known in her own right. In the first year of their marriage, Enid was ‘Queen of the Public Service’ in a Hobart carnival and had nine-year-old Errol Flynn as her pageboy. She was very involved in her husband’s career and, in 1943 after Joseph’s passing, Dame Enid Lyons became the first woman in the House of Representatives and the first female member of Federal Cabinet in 1943. You can read more about the interesting life of Dame Enid Lyons here.

Lyons is a charming suburb and well worth a visit if you are in the Woden area at any time.