The beautiful suburb of Hughes is part of Canberra’s Woden Valley, and is located just 2.5km from Woden Town Centre and a mere 4km from the centre of Civic. When you walk through the suburb now it’s hard to imagine that, before the suburb was established in 1962, it was occupied by a handful of people and a whole lot of sheep. These days there is a bustling local shopping centre, several primary schools and lots of community facilities including a Tennis Club and Community Centre.

Those who know their Australian History will recall that the suburb was named after Australia’s 7th Prime Minister, William Morris “Billy” Hughes. Initially a member of the Labor Party, Hughes was a contemporary of King O’Malley (after whom the nearby suburb of O’Malley was named). Hughes became the Labor Prime Minister when Andrew Fisher resigned in 1915: however, his leadership was to be short-lived. A strong supporter of the polarising topic of wartime conscription, Hughes was expelled from Labor in 1916. He quickly established the National Labor Party and then formalised a reluctant wartime coalition with Joseph Cook’s Liberal Party into the Nationalist Party of Australia in February 1917. The Nationalists won the 1917 election, and Hughes became Prime Minister for a second time, with Cook as his deputy.

Hughes was in office during the first World War. He was a colourful character, known to the troops as “The Little Digger” and called “pestiferous varmint” by President Woodrow Wilson of the United States of America (the two leaders apparently clashed a fair bit!) Hughes signed the Treaty of Versailles on behalf of Australia at the Paris Peace Conference in 1919.

Hughes resigned his Prime Ministership under party pressure in 1923. At the time, he was Australia’s longest serving Prime Minister, although this record has since been succeeded several times, first by Robert Menzies. Hughes remains the longest serving member of Australia’s parliament: he was a member of the House Of Representatives for 51 years, and had been an MP for a total of 58 years (he had been a member of the NSW Colonial Parliament prior to becoming a Federal Member). He was still serving in Parliment when he died at the age of 90 in 1952, making him the oldest person ever to serve as a member of the Australian Parliament. He was also the second last surviving member of Australia’s First Parliament of 1901: King O’Malley outlived him by 14 months.

The suburb of Hughes was gazetted in 1962, and construction of homes commenced the following year. By 1964 the suburb had its first residents, and the population had already reached 4050 by 1974.

There are four neighbourhood parks in Hughes, and nearby bushland offers residents plenty of additional recreational opportunities. 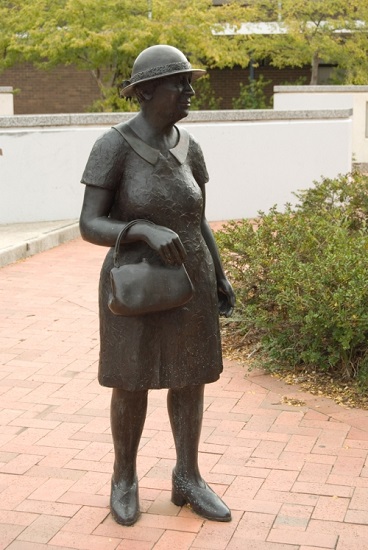 The streets in Hughes are named after wartime contemporaries of Billy Hughes who served in parliament or the armed services. Some examples include:

One of the lovely features of the Hughes shopping centre is the artwork that is featured in the area. The one that probably attracts most attention is the sculpture”Stepping Out” (lovingly nicknamed ‘Mabel’), a life-sized figure of a woman dressed in 1950s attire. This work was commissioned by artsACT in 1997 and is the work of artists Giovanna Ianniello and Gerard Murphy. Mabel is occasionally adorned by residents with clothing such as scarves or t-shirts, and is sometimes seen to be holding a leash attached to a very-much-alive canine.