The Woden District suburb of Garran is the focus for this month’s Corinna’s Canberra. Garran is a near-neighbour of our Woden rooms, just a 7-minute drive and just over two kilometres away as the crow flies. 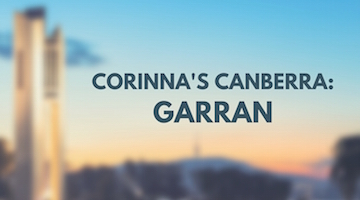 Garran was settled in1966. It is named after Sir Robert Garran who is well known for his significant contributions to developing higher education in the ACT. Sir Robert was responsible for the establishment of Canberra University College, helped establish the Australian National University and was the recipient of its first degree (Honorary Doctor of Laws).

Most of Garran’s 51 streets derive their names from Australian writers. One such writer is Rosa Caroline Praed, whose first novel, “An Australian Heroine” was published in 1880. Another is the poet George Gordon McCrae whose poems are among the earliest Australian poems on Aboriginal themes, dating back to 1867.

Garran is a picturesque suburb which is popular for its large blocks, mature gardens and proximity to Red Hill Nature Reserve. One of Garran’s distinguishing features is that a number of blocks back onto open space which provides peace and recreational amenities for its residents.

One popular spot for walking, jogging and just enjoying the view is the Red Hill Nature Reserve. There are also many other open spaces for residents and visitors to utilise, such as Garran Oval which can be found next to the Garran Primary School. This community facility is used for both formal and informal sporting activities and other recreational pursuits.

Garran Local Centre and the open space between Hindmarsh Drive and Curlewis/Rusden Streets are also used by the community for pleasure and relaxation, adding to the appeal of this suburb.

Garran’s shopping centre is small but thriving. There are restaurants and cafes, medical suites, a supermarket as well as other local businesses. Parking can be found both out the front and behind the centre.

The Canberra Hospital (formerly “Woden Hospital”) and the National Capital Private Hospital are located in the south-west corner of the suburb.

Being just a stone’s throw away from our rooms in Woden, and quite close to our Deakin practice , Garran is a neighbouring suburb that we know and love for its amenities and convenience.