During September, Corinna’s Canberra is exploring the suburb of Campbell. Campbell was established in 1928 and is one of Canberra’s original suburbs. The area is situated at the base of Mount Ainslie and extends to the South East of the central business district. Its street layout is very similar to the design created by Chicago architect, Walter Burley Griffin. You can read more about this here. 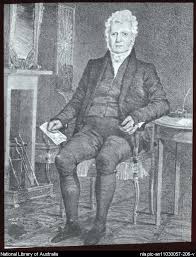 The owner of Duntroon station on which Campbell is now located, Robert Campbell (1769-1846), is the area’s namesake. A merchant and politician in Sydney, he was a member of the first New South Wales Legislative Council established in December 1825. Robert Campbell had a particular interest in religion and education and was committed to advancing these domains during his time in government. He was also a formidable figure in the area of commerce. It is said that many organisations benefited greatly from his gifts. Some of these included the Canberra Church of St. John’s, St. Philip’s in Sydney, St. Peter’s in Cook’s River, and Christ Church in Queanbeyan. You can find out more details about this here.

The Campbell family was influential in many ways in the area’s early history and there are still members of this family living in Canberra today. The clan was Scottish and brought many other Scots to the district as workers. They were also prolific land owners in the area. Duntroon House, now the Officers Mess at the Royal Military College at Duntroon, Yarralumla and the Oaks Estate are just some of the properties the Campbells possessed. The Oaks Estate got its name from a mansion built there by Robert Campbell called the Oaks. When the Campbell family later sold the land it was built on for subdivision and development, it was on condition that the Oaks and the surrounding land remain intact and not be renamed (https://en.wikipedia.org/wiki/History_of_Canberra ). Furthermore, Campbell built Australia’s first shipbuilding yards in 1807, at the site that is now the Royal Sydney Yacht Squadron, Kirribilli.

The suburb of Campbell has a heavy military influence. It is home to the Australian War Memorial, the Royal Military College, the Australian Defense Force Academy, and most of its streets are named after military personnel. As well as this, the CSIRO Corporate Headquarters can be found here, and Ainslie Village which is an accommodation centre for people who are homeless or .at risk of becoming so The schools in the area include Campbell High School, Campbell Primary School, Canberra Grammar Northside Infant School, and St Thomas More’s Primary School. Campbell also has local shops and the Campbell Park Offices.

Campbell is one of Canberra’s most historic and scenic suburbs. It is well worth a visit, not only to learn about its rich history, but also to take in the beautiful views of Mount Ainslie and its surrounds.