Corinna’s suburb in the spotlight today is Barton. Located around 4 kilometres from the city centre, Barton is known for its small population and for once being the most socio-economic advantaged suburb in the country (according to the 2011 Census).

Barton is surrounded by the following suburbs: Parkes, Capital Hill, Kingston, and Forrest.

We’re exploring the suburb of Barton in today’s article.

The first houses in Barton were constructed between 1926 and 1927. It was during this time that the new Parliament house in Canberra was opened, so to meet the need for housing public servants, the Barton Housing Precinct began.

The suburb was gazetted on 20 September 1928. Since then it has been home primarily to public servants, politicians, and political staffers.

Streets in Barton are named after Australia’s governors. Below are just some of the street names and the persons they were named after: 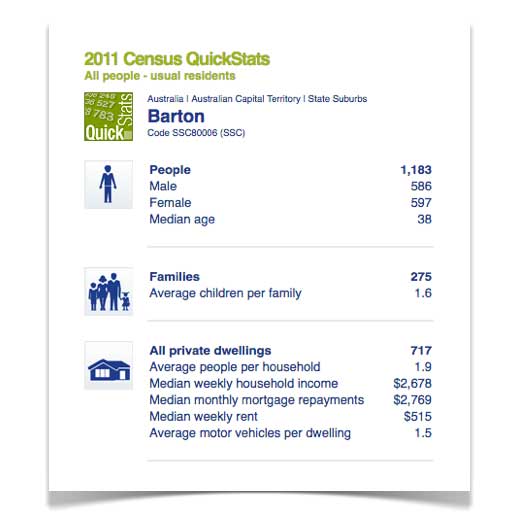 As of the 2011 Census, there were 1,183 people living in Barton, with a median age of 38. Central government administration is the major industry of employment in Barton, owing to the fact that the suburb is very near the Parliament House and many other government buildings.

Barton is home to a number of government and national institutions as well as heritage sites.

The iconic National Press Club of Australia, established in the ’60s, is located on National Circuit. The red-brick Brassey Hotel, located on Belmore Gardens and Macquarie Street, dates back to the 1920s. Hotel Kurrajong, also built in the 1920s, has recently undergone gentrification but many of its historic architectural features like the pavilions, deep verandas and courtyards were retained.

One of Canberra’s oldest parks, Telopea Park, defines one of the borders of Barton. Telopea Park was named after the native tree of Waratah (botanical name Telopea), which is supposed to surround the parkland. Despite the fact that the plan to plant this native shrub never materialised, the name Telopea Park has stuck.

Now the park is a favourite outdoor recreational area for families, running enthusiasts, even a venue for children’s parties.

Corinna Dental Group’s Deakin practice is the closest practice for residents and workers in Barton to visit, and is accessible via Adelaide Avenue from Barton.