It’s time for another Corinna’s Canberra, where we explore Canberra, suburb by suburb, to highlight the features and history of our beautiful city.

Our featured suburb today is the area of Acton, home to the Australian National University as most of the suburb is covered by its campus. It is located at the North Canberra District, right next to the CBD.

Acton was named by Lieutenant Arthur Jeffreys (a draughtsman who served in the Royal Navy but retired as lieutenant in 1840) after a town in Denbighshire, Wales in around 1843 (source: ACT Government Place Names)

In the 1910s, in the lead up to the development of Canberra as the Nation’s capital city, the area was utilised as the hub of activity and administration. There was a bank (the Commonwealth Bank), offices for the new city’s surveyors, and accommodation for construction workers.

“Around 1912 ACTON became the Administrative area of the city. Here, the old Acton Farm House was used to accommodate officials and a number of timber dwellings erected for married men and barracks for the single men – the latter was named THE BACHELORS QUARTERS. Married construction workers built their own humpies and the single men were housed under canvas.“

The first Canberra Hospital was built on the hill in Acton: this building is now used by the Australian National University. The Royal Canberra Hospital that many Canberrans still remember was built on Acton peninsula in the 1940s. These buildings were demolished in 1997 under the most tragic of circumstances to make way for the National Museum of Australia.

According to early records, Acton remained the administrative and social centre for decades after World War II. It was a place to go to register births, deaths, and to be tested for a car licence.

The streets of Acton were named before individual themes for suburban street names were adopted so there was no common theme for the streets in the suburb. Some of the streets and their name origin are: 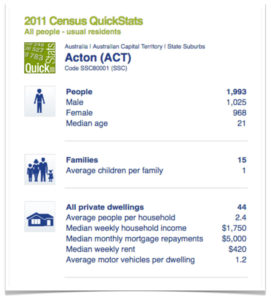 You will notice that the median age of people living in Acton is young at age 21. This is because most of the residents in the suburb are students of Australian National University living off-campus. Of people aged 15 years and above, around 8% were married whilst 90.5% were never married.

Around 18% of the people employed in Acton worked in tertiary education. Other top industries of employment include food services and clothing retail. (Source: Census 2011)

Aside from the Australian National University campus, which covers most of the suburb of Acton, a more recent feature in the suburb is the precinct called NewActon. It is located at the corner of Edinburgh Avenue and Marcus Clarke.

NewActon is an urban village known for its restaurants and cafes, as well as its dynamic design and outdoor art collection. Perhaps the most famous (some might say “infamous”) feature of this place is the Nishi Building, an architectural gem, which won the International Project of the Year at the 2015 Building Awards in London (Source: Canberra Times)

Corinna Dental Group Deakin is the closest of our three practices to Acton. It’s around 9 kilometres away and a 13-minute drive via Commonwealth Avenue.